Greetings, ENGL 494! I’m writing you tonight—somewhat bleary-eyed and just a few hours before deadline, sound familiar?—with the hope that you will join me in an academic social experiment. The goal of our experiment will be to produce a public, student-driven dialogue that questions assumptions about two things: the potential of student writing, and the notion that the design of digital writing technology is best left to the experts. We will encourage ourselves—right here in the margins of this document—to dream up ever more transformative, engaged, and meaningful student publics, and think through what technologies and social practices might help bring those publics into being.

Instructions for brave and willing participants will follow at the end of the piece. But first, let me explain why I think this endeavor is worth your engagement.

As you know, Paul Evans has invited me to join the class this Thursday to share with you my work in digital humanities, particularly that of Social Paper, a tool I co-developed as a graduate student with the talented Commons in a Box team at The CUNY Graduate Center. The idea behind Social Paper was to create a digital platform that allows students to socialize and comment upon papers across courses, disciplines, terms, and institutions, and provide a centralized space to produce, archive, and build upon one’s academic writing over the course of one’s education. It was inspired by the flourishing of participatory practices within academics in which students, educators, and scholars use networked digital technology (such as blogs, wikis, and social media) to facilitate highly-collaborative, interactive, and often public-facing forms of learning and research.

Today, there is a tremendous amount of exciting participatory practices underway in academic learning and research. For example, Amanda Licastro, a professor of Digital Rhetoric at Stevenson University, recently had her class publicly annotate a scholarly article using hypothes.is, a free tool for annotating websites. Danica Savonick, a professor of English at Queens College, is currently having her class blog about their readings in her English course on literature and dissent. And Donna M. Alexander, a lecturer at University College Cork, has recently written about the value and relevance of assigning “Twessays,” or Twitter-based writing assignments in the classroom. Scholars too are using participatory methods for their research, such as Kathleen Fitzpatrick’s public posting of her drafts of Planned Obsolescence: Publishing, Technology, and the Future of the Academy for crowdsourced feedback. One could go on and on. 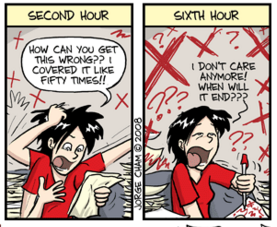 How some professors feel while grading.

As a graduate student, I was deeply intrigued by participatory practices, especially in their promise to make the process of academic writing more community-oriented. I had worked as a journalist before joining the Ph.D. program in English at The CUNY Graduate Center, and I found it disorienting to spend hours upon hours writing term papers that only a single professor would read. While I relished whatever critical attention the professor was able to share with my writing, I realized that, as Peter Elbow observes, professors can sometimes be “too good of readers.” The expertise, experience, and obligation of professors to regularly grade massive amounts of student writing understandably limits the amount of genuine intellectual and personal interest they might have in individual pieces of student writing. Thus, participatory learning seemed like a promising way in which students could supplement the student-teacher relationship with the social support and mentorship of an entire learning community.

Despite these enthusiasms, however, I also had some reservations about participatory learning, a few of which I’ll outline here. While in theory I liked the idea of sharing writing with other students, I was also terrified by it. As a very green graduate student, I was learning a new way of thinking and writing, and I was far from eager to expose that process with students I didn’t know, much less the general public! Learning is an incredibly vulnerable process—it requires us to admit ignorance, take risks, stumble, and repeat ad infinitum. While one of the objectives of scholarly training is to become capable of sharing knowledge with others, there are many points within an education or academic career in which thinking should have its right to the privacy of one’s own mind or a trusted relationship. Thus, I was uncomfortable with what seemed to be a lack of concern for different forms of privacy in some of the participatory learning practices I encountered.

I was also concerned by the way the sheer diversity of platforms used for participatory learning could at times thwart the very student public they seemed to promise. For example, course blogs, despite their technical publicness, are still practically speaking siloed to the class and the academic term. From what I’ve seen, they rarely attract engagement from outside readers, and are more or less abandoned at the end of a course—potentially along with the community and writing that was being produced within it. This is not to say that nothing of value remains of a blog’s intellectual and social activities once the course ends (for the record, they are still one of my very favorite forms of participatory learning). However, when compared to the robust and expansive networks manifest on Facebook and Twitter—networks which would be impossible to build anew every four months—one might begin seeing the community value of building single network open to all students at every institution rather than a course blog that lives and dies with every academic term.

Finally, as someone interested in the politics of software—that is the questions of who gets to decide how our everyday digital technologies are shaped—I was also concerned by the ways in which participatory learning sometimes reinforces the use of digital platforms that many scholars have argued are politically or ethically unjust. For example, scholars such as José van Dijck, David Galloway, John Cheney-Lippold, Lawrence Lessig, Rebecca Mackinnon, and Siva Vaidhyanathan have persuasively demonstrated the way digital companies such as Google and Facebook use code to surveil, manipulate, censor, or control user populations, or otherwise make large scale decisions that affect the public without adequate public understanding and consent.* Given that participatory learning is committed to democratic principles, it seems then that the tools it uses should be as well.

It was this mix of enthusiasm and concern that led my collaborator Jennifer Stoops, a student in Urban Education at The CUNY Graduate Center, and I to dream up a digital student commons that would allow learners to socialize their academic writing as easily as other platforms allow users to network memes, status updates, and check ins. But we also had a broader vision for the tool. Ultimately, we wanted to open up its design and governance to the broader student public, as a way to give students more control and ownership of the tools they use to carry out their learning. Just as higher education has a long history of student newspapers and student governance, why couldn’t students also be critical stewards of their writing and networking technologies?

In December of 2015, with the support of a National Endowment for the Humanities Digital Start Up grant and a CUNY Advance Grant, we launched a beta version of Social Paper, which is the tool on which you are now reading this piece. Currently, individuals not affiliated with The CUNY Graduate Center can only post comments, not papers, but nonetheless I’m hopeful that this early stage of Social Paper illustrates what might be exciting about a digital student commons open to students at any institution (and perhaps even learners with no institutional affiliation). For example, users can comment at a paragraph level and mention other users in the comments to send them an email notification to request feedback. Authors are able to select a variety of options that allow them to grant access to papers with different individuals, groups, or classes on a case by case basis.

There are also features to help discover and interact the writing of other members of one’s academic community. For example, an activity stream on the landing page of Social Paper allows visitors to see recent paper and comment activity, as well as search and browse through the entirety of all public papers. Today, I used these features to discover writing by academics I both know and don’t know, such as this recent project proposal for a database of women scientists by Eileen Clancy, this chapter draft on “Oysters” for a book on medieval literature and ecocriticism by Professor Karl Steele, a short story by Amanda Campone, or this practical guide to writing emails to professors by Hung Dam Quac. 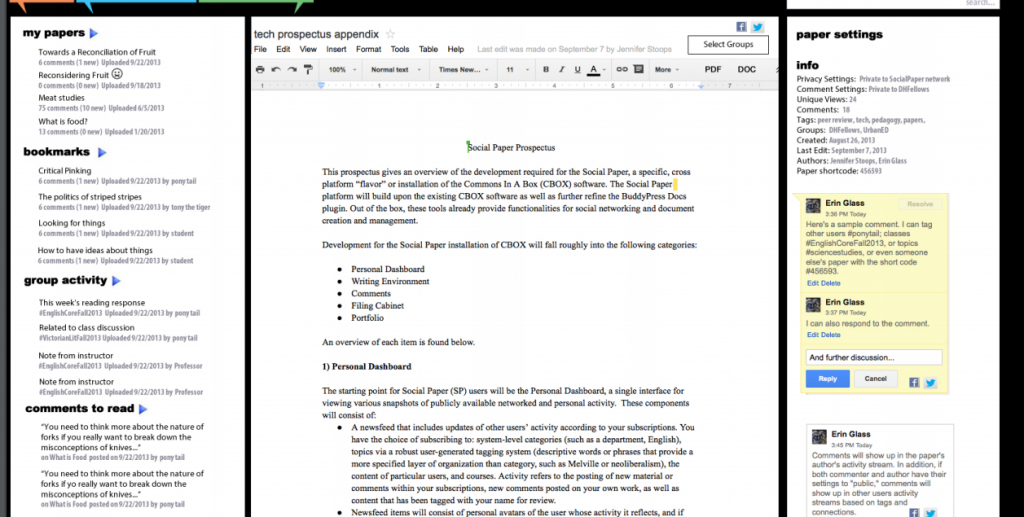 But the most important aspect of Social Paper is not in any one of its features, which are still in progress, but in the idea that students, not profit-motivated corporations, should decide the functionality and policies of digital environment which they use to share their writing. And thus, this is where our social experiment begins and I ask for your assistance in dreaming up the possibility of a student digital commons.

If you could build any sort of digital platform for networking student writing, would you want to? If so, what would it look like? What are its features, its challenges, its potential? How might it change the practice of student writing?

If you have any thoughts on these questions, the points raised in this piece, or feedback on the functionality of Social Paper in its present form, I’d love to hear your thoughts! You can comment by clicking the little “+” icon that appears when you hover the cursor over a paragraph, or by using the comment field below.  Thanks for your interest!

*Readers interested in a short overview of the critical perspectives of digital technology, can check out this bit of my in-progress dissertation introduction.